NEW CLEAN EATING MAGAZINE!
I just got sent the new April edition of Clean Eating on my tablet... I hope you've picked up your copy! I love it when the new edition comes out, there are so many new recipes to choose from!

Thusfar I already made the Farfalle with Chile-Lime Shrimp, and it was EXCELLENT! I'm not going to lie though, I didn't have farfalle, so instead I used Multigrain Fusilli. When I began clean eating, I thought that every single ingredient had to be exact. My grocery bill went up, and my cupboards got stocked with a bunch of random shit that were really only good for one recipe! So I've learned that you can accomplish the same thing using what you have on hand, so long as you look at the similarities and differences of what you're substituting (refer to my older post regarding substitutions!)

Last night, I tried my hand at Guy Fieri's recipe in CE magazine, called Stuffed Acorn Squash with Turkey Sausage & Peppers. Because I have always wanted to try cooking acorn squash, and I love Guy Fieri. 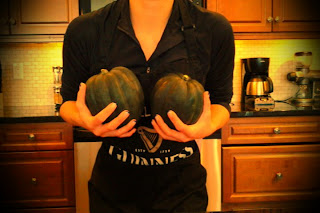 So, call me an idiot, but I always thought that the definition of 'Sausage' was a meat that's minced or ground and then mixed with spices and stuffed into an intestine or other casing. You know, sausage = tube. Well, this recipe says 'sausage', but it's basically just ground turkey, mixed with spices, and then cooked. I... I still don't get it. But whatevs. Wacky. 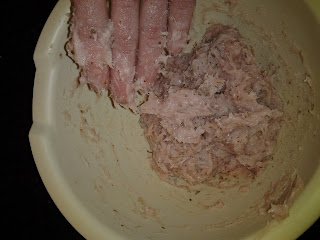 (I will point out that I did not let the meat sit with the spices for the 8-24 hours required. I don't really know if it makes THAT much of a difference, I'm sure Guy would impale me with his spiky bleached noggin if he found out, but meh.) 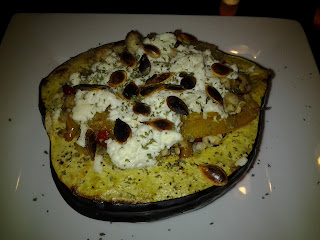 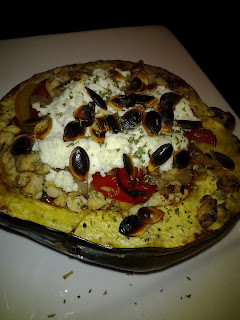 (I would recommend that, if making this recipe, you sprinkle the seeds on AFTER broiling them. It seemed that before the ricotta could even get a chance to melt, the seeds were already starting to burn.)

All I know is that, it tasted bloody delicious. To you, Guy Fieri.
Posted by Zombiegyrl at 12:28 PM