Hurry Up and Wait

Well, I survived Operation: Barium Butt Blaster. And I don't even have any P.T.S. symptoms that I'm aware of. Well, except for that one time I woke up in a cold sweat screaming, "WRONG DOOR!!" But other than that, I'm cool.


I'd also like to thank everyone for their kind words- -I didn't realize how many people read my blahg. It's always a surprise when I'm in the grocery store, and someone comes up to me and says, "How are you? I laughed until I cried at your story. Oh and sorry about your colon." And a fine day to you too, Mrs. Peterson....

Unfortunately, I won't get the results of my probe back until the beginning week of May. Which might as well be an eternity. I was told by my doc to absolutely NOT change my diet until then, just in case they need to do another round of tests. (If that was the PRELUDE to another test, I'll take a roofie-colada as my prep.) But here's my arguement: When you drink your favorite Matcha Latte and have to spend a few hours in a location near a toilet 'just in case', and you fear going in public after eating anything with wheat in it... it pretty much puts a halt to your social life. So I made my first Matcha Latte using Almond Milk. Honestly, I don't even really taste the difference. It's a little less sweet, but that's probably because I chose the unsweetened almond milk. I figure I can always add a few drops of agave nectar to it if I want it to be sweeter. I hope my tests come back as lactose intolerance, cuz this shit's easy. 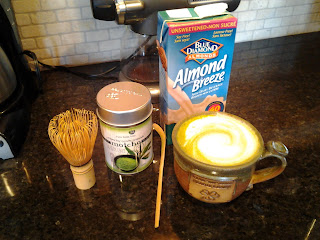 I also downloaded an app for my tablet called 'Doc's Diet Diary'. You can write down what you ate for breakfast, lunch, dinner, snack and beverage and then also add 'symptoms' if you have any adverse reaction to anything. I figure that if the tests don't come back with any conclusive results (how optimistic!), I can at least have a week or two already tracked to try to narrow down what I might be having an adverse reaction to. Because I can imagine that's what the next suggestion will be from the doc. 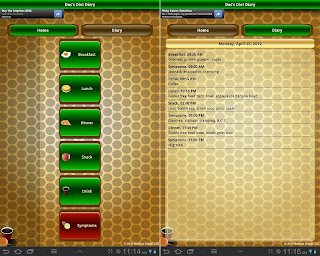 I've been reading up on this whole gluten thing too. What a pain in the ass that'll be, if it comes back as such. It's not just as simple as staying away from wheats, barleys and whatever.... everything from the glue used to fuse teabags, to lip balms can contain traces of gluten. So you have to read every little label on everything you put near your mouth. What kind of bullshit is that!?

In some ways, I'm all, "Hey, it'll just come back as IBS, which I sum up as Chronic Upset Tummy, and I'll just have to live with it." On the other hand, after having my insides being blown out like an underground sprinkler system, I want there to be some fucked up parasite that I contracted from some foreign country that has a name that is made up with numbers and letters like HRG6DE89 Strain of the Colonflorenza Shittisalotus. And then I can be all, "Yeah. That's right. Good thing I did test. GET SCREENED, YO."

Time will tell. In the mean time, I had a great run yesterday which helped clear my head. I've been slack on this whole running program thing. My little ticker and lungs always give out far before my legs and body tire. So after feeling like I was gonna have a goddamn heart attack after running the stairs by my house, I walked for about 15 minutes, and then ran the rest of the way and did the stairs again. It's about time this body started doing what I want it to do.
Posted by Zombiegyrl at 11:35 AM