Okay, I've been slack in the cooking department. Or, chickenshit if you want to be a dick about it.

I've been reserved to staying safe, and just grilling chicken, baking salmon, but NO MORE! Tonight, I'm going to cook a roast beef, like I used to do on Sundays. Once I perused the recipes of my weekend favorites, I realized that there are a few that I'll have to alter because of the gluten free thing, but there are a few that I can make without worry, because they're already gluten free! So it's time for some Herb Crusted Roast Beef, with roasted veggies! Yum! 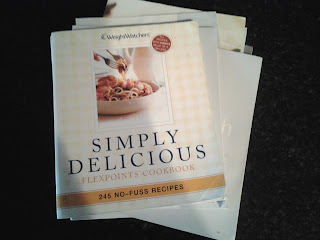 This recipe is a longtime favorite of mine. Of all things, it's from a Weight Watchers book. I've never followed a Weight Watchers plan, because I don't like math and can already read a nutritional info label and know if it's bad for me or not, but it's a cookbook that got me started on cooking when I moved out on my own. It included a lot of spices and herbs, stuff that I hadn't really worked with before coming from a household that kept meals simple in the spice department. Not that there's anything wrong with that, but I really wasn't exposed to spice and herbs other than table salt, pepper, chili powder, garlic powder and chives.  So having recipes that called for thyme, rosemary, fresh parsley and cilantro was a big stretch for me! This book inspired my passion for cooking, and it's easy to tell if you look at the book. The pages are falling out, they all are stained, and there are pen marks all over the recipes. To be honest, you can flip through any cookbook I own and figure out which are my favorite recipes. The only thing clean about my cooking is the ingredients list. I am a VERY MESSY COOK. Thank goodness for my OCD Commonlaw Spouseoid who follows me around and cleans up all of my spills.

Not an exaggeration. Not even slightly.

So anyways, I found a product called "Gluten Free Pantry", from the makers of Glutino. It's a French Bread mix of dry ingredients that you just have to add milk, honey, vinegar, salt, butter and eggs to, and then let rise and bake. Since I don't want to start stocking my cupboards with a bunch of random flours that I don't exactly know about yet, I figured this is a safe bet.

That shit must be good, because Commonlaw Spouseoid keeps ripping pieces off of the baked loaf and eating it. And commenting, "Mmm... that's good bread." And it is. It's really good bread. It's supposed to be a french loaf or pizza crust, but it's like regular bread. Go figure. 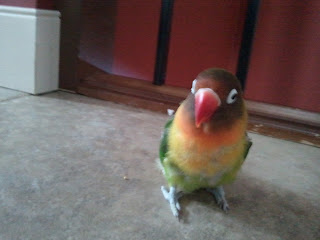 Oh, note of mention. You know how I had previously posted that gluten free food seems like just grains smashed together? Well, here's proof. My finicky lovebird Sawyer only likes her own food. Like, her pellets and her seed mixes and millet. The only "human" food she will eat is apples, Cheerios, corn (only if it's on the cob), and oranges (sometimes). Every other fruit or veggie I put in her cage she defiantly throws onto the floor. And if you're all, "She's a bird, she probably just dropped it.", then you obviously have never spent a significant amount of time around a bird. They let you know loudly and clearly when they like something and when they don't. In fact, in her old cage, she had removable seed cups, and when I put something she didn't like in it, she would remove the seed cup from the bars of the cage, throw it on the bottom and shit on it. I'm not even close to kidding.

Anyways... where was I going with this.... oh yeah. Gluten free. So to test what she likes, I'll hold food up to her to see if she'll bite it. It becomes immediately evident that she digs it if she thinks about it, tastes it, and then takes it from me. If she's unimpressed (normal response), she'll shake her head at it, waddle away and yell at me. When I held the gluten free bread up to her this morning, she happily helped herself. Then later, I was having some gluten free rice crackers, and I held one up. She went apeshit trying to get it from me, stole a big piece, dragged it into her bowl and munched on it until it was gone.

IN CONCLUSION: I apparently have to eat like a bird. Seeds, fruit and veggies. I feel like I'm the goddamn Black Swan, pretty soon I'm gonna sprout wings, have my knees turn backwards and "BWACK!" myself all the way to the pond. Commonlaw Spouseoid said that if I bite him, he's leaving. Or that if I start acting like Natalie Portman, he'll lock me up and stop feeding me. So if I start claiming that I'm Queen Amidala, make out with chicks, and begin pirouetting around town.... it'll time to send this swan to the pond in the sky.

This has been a very random post...
Posted by Zombiegyrl at 7:59 PM