Back on the Track

Rollercoaster, thy name is Zombiegyrl's Life.

I've been going through ups and downs with this Gluten-Free stuff as it is. This past week has been a hard one. I'm in a theatrical production that has been unorganized and chaotic since day one and it was opening weekend last weekend, so I've been max stressed out for weeks about that. Top that off with my grandfather's death last week, it's been hectic and stressful. But add a major new allergy that I'm struggling with sorting out to the equation, and all Hell breaks loose.

The problem has been that, haven't had the time to cook or meal-plan. So when it's tummy-rumble time, I've been getting frustrated and confused with what to make, and then throw up my arms and say "Fuck it!" and I resort to grabbing something small that's already pre-fab like GF crackers with homemade salsa, or veggies, or a quick salad... well, since it hasn't been very fulfilling, I get snacky later on. And when I get snacky, I get more frustrated. And when I get frustrated I suggest picking up ice cream. Or pizza. Or something that is the opposite of healthy. 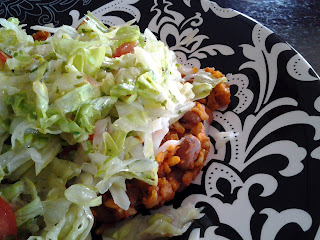 SO. Time to regroup. Saturday I made one of my favorite recipes, Gluten-Free Taco Bowls. It was in the Jan/Feb 2012 Edition of Clean Eating Magazine, and I continually whip out my tablet to find the recipe, because it's just SO DAMNED GOOD.

Last night, I was all ape-shit excited about the brand new food processor I had just purchased, so I made Salmon with Sun-dried Tomato Tapenade and Lentils with Swiss Chard (Both from The Eat-Clean Cookbook by Tosca Reno). Then I made enough hummus to feed the Canadian Military. I love my new food processor. 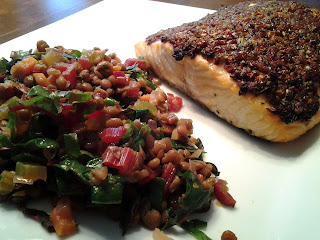 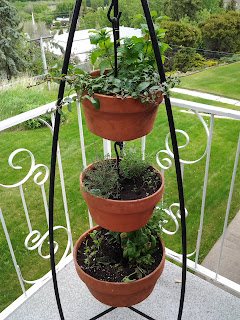 AND I've been excited about cooking with all of the yummy fresh herbs I've been growing on my deck. I can't grow a proper garden because my house is Deer Foodcourt, and they're a bunch of pricks and eat everything they can wrap their furry mouths around. And when you walk up to them to say, "Get the hell out of here! Those are MY ROSES!" they just chew slowly and look at you like a defiant teenager as if to say, "I'll eat whatever I damned well please." and then you do the 'shoo! shoo!' thing at them and they slowly turn around and walk away, and if they didn't have hooves, I'm pretty sure they'd give you the finger too. Because they're a bunch of pricks.
So anyways, FRESH HERBS! I'm growing cilantro, chives, rosemary, salad greens, orange thyme, lemon thyme, spearmint, mojito mint, peppermint, parsley, dill, oregano and Italian basil. I'm also trying to grow potted tomatoes, peppers and chili peppers, but I seeded them quite late, so I might be eating fresh salsa in September. Best laid plans... 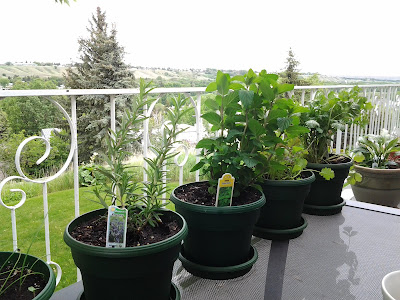 So now, it's time to meal-plan. Or at least have something healthy on hand that I can whip up quickly when I'm pressed for time, or not in the mood to cook. Also, once this production is finished, it'll be summer, which means three things. Road construction, no hockey, and PLENTY of beautiful weather for working out OUTSIDE! Rockin' summer bod, here I come!