Alright. A while ago, I had written a post reviewing kale chips and how I had purchased a bag of them prefab, and described how they tasted like ass.

I got a lot of feed back from that post. Cheers AND jeers. Some agreed, or said they were glad I had tried them, because they haven't had the guts to give them a go. However, the Kale chip fans (I'll refer to them from now as K-Fans) begged me to try them again. But this time, make them yourself, they pleaded. They gave me recipes. They gave me suggestions for flavoring. All the while raving and ranting about how good they are. Well, the K-Fans outweighed the Naysayers, and to give a completely accurate review to those who haven't tried them, I decided to give them another chance. 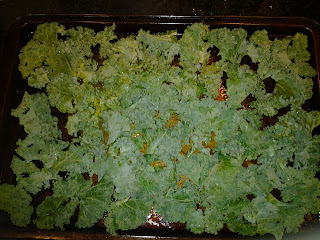 I watched them like a hawk. JUST to make sure that they didn't burn, but got crispy enough to be the consistancy of potato chips. I removed them at the exact right moment. They came out in golden perfection. 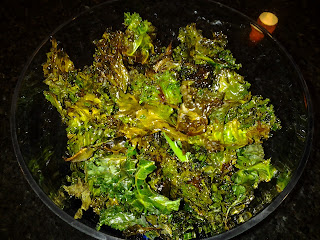 I fed one to Commonlaw Spouseoid. I cannot accurately describe his face, but this is a drawing of what it looked like.

Then he so elequently gave his offical review, and this is quoted word for word.

Commonlaw Spouseoid's Official Kale Chip Review:
"This is what I imagine the underside of balls would taste like."

He is apparently not a K-Fan.
The more I munched, the more this disgusting aftertaste started creeping in.... and the more I wanted to avoid them.

My 2nd Official Kale Chip Review
So after their second chance.... Sorry K-Fans, I stand by my original review, however, it tastes less like cardboard than the pre-fab. I am still not a K-Fan, and will not be trying them again in the future.

Because they still taste like ass. Or, you know... the underside of balls.
Posted by Zombiegyrl at 7:40 PM